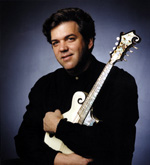 Mandolinist Butch Baldassari created new interest in this age-old instrument and is luring legions of new admirers to the music he created. Download more information.

With mastery of a wide variety of mandolin styles, Butch's versatility was unmatched. He moved from bluegrass festivals to symphony halls with ease and grace, earning respect and admiration in these seemingly disparate worlds.

A native of Scranton, PA, he was first introduced to the mandolin at the Philadelphia Folk Festival in 1972, where he saw Andy Statman with David Bromberg and Barry Mitterhoff with the Bottle Hill Boys. He was so inspired by their playing, that he resolved to learn to play the mandolin. He began studying immediately, experimenting with the mandolin's unique sound and delving more deeply into the history of the instrument.

In 1985, Butch became a member of Weary Hearts, a critically acclaimed bluegrass band, winners of the Society for the Preservation of Bluegrass Music in America (SPBGMA) 1988 Best Bluegrass Band Award.

After attending the Classical Mandolin Society of America convention in November 1990, and intrigued by the existence of mandolin orchestras in America at the turn of the century, he returned to Nashville (where he had moved in 1989) and founded the Nashville Mandolin Ensemble in June 1991, recruiting some of Nashville's best and most talented string players. The ensemble, composed of mandola, mandocello, guitar and bass, in addition to mandolins, became one of Music City's city's most unusual and sought-after entertainment.

"We surprise our audiences every time we play," Butch said. "People just revel in the sound of all these marvelous instruments and in the tremendous variety of music we perform. Our repertoire includes Bill Monroe's Bluegrass, as well as the music of O'Carolan and Vivaldi."

Butch has appeared on "A Prairie Home Companion," "CBS This Morning," CNN and "Riders in the Sky Radio Theatre."

Not just a performer and bandleader, Butch was widely respected as a teacher, serving as Adjunct Associate Professor of Mandolin at Vanderbilt University's renowned Blair School of Music. His instructional videos, books and tapes are among the most widely used by aspiring mandolin players, and his workshops at festivals including Telluride, Rocky Grass Bluegrass Academy, Winterhawk and Grass Valley were standing-room only sessions. His annual appearances at the Classical Mandolin Society were among the event's most popular.

With his own successful record label, SoundArt Recordings, Butch broadened both his reach to new audiences and his influence on the music.

In Butch Baldassari and the music he created, the past, present and future of this small, yet richly powerful instrument were in the best of hands.

Some of his recordings:

A Day in the Country - Pinecastle Records

You Can Play Bluegrass Mandolin (Vols. I and II), Homespun Tapes (Video)